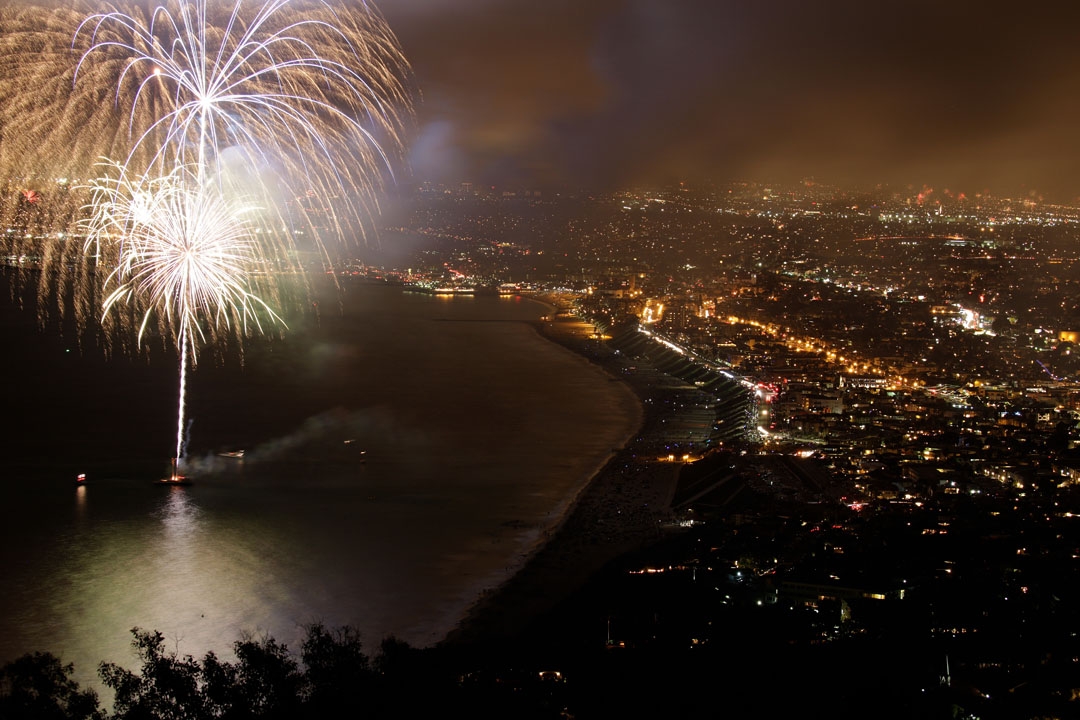 Happy 4th of July to the Hollywood Riviera – A Decade and a Half of Amazing Fireworks off Torrance Beach is coming to a close with today’s  July 4, 2016 fireworks display being the last year of the privately funded event.  What started out as a tribute to her childhood sweetheart, Paul Briles, who she met when she was 4 years old has turned into a boon for the Hollywood Riviera and the entire South Bay.  A big thanks to Jacqueline Briles, who has been actively sponsoring and always looking forward to her Torrance Beach July 4th Fireworks Show in memory of her husband, for the past 15 years.  Torrance Beach will be packed tonight with so many folks coming from far and near to witness the final show.  It’s sure to be a stunner.

Many thanks to Mrs. Briles for her many years of philanthropy to the neighborhood in sharing this fabulous event with the Hollywood Riviera residents and all those that come from far away.

Jacqueline Claire Briles (Jackie), 95, of Redondo Beach, California, passed away on March 30, 2016, from complications following surgery. Visitation will be held from 3:00 pm to 8:00 pm April 13, 2016 at Green Hills Mortuary. The funeral service will be held at 12:00pm April 15, 2016 at Riviera United Methodist Church. Rev. Mark F. Sturgess of Riviera Methodist Church will be officiating. Private graveside service will follow the funeral at Green Hills Memorial Park at 2:00 pm. Funeral arrangements are being handled by Green Hills Mortuary. Jackie was born in Los Angeles California on December 19, 1920. She graduated from Los Angeles High School. Jackie met Paul Briles at a family picnic when she was 4 four years old. She often told the story that from the beginning she knew she would marry him. And so her dream came true, they were married on May 18, 1946, when she was 28 years old. They were married for 51 years until Paul passed away on July 9, 1997 at the age of 79. Jackie worked as a full time homemaker / mother raising and guiding her three sons for 68 years. Her husband Paul built and operated two very successful aerospace fasteners manufacturing businesses. She enjoyed fishing, watching TV and playing spider solitaire. She also loved playing cards weekly with her long time lady friends. Their maximum risk per game was $2. She also actively sponsored and looked forward to her Torrance Beach July 4th Fireworks Show in memory of her husband, for the past 15 years. Jackie is survived by her 3 sons, Richard, Robert and Gregory, 5 grandchildren, 9 great grandchildren, nephew Jim Lindsey, niece Genie Le Clerk and other family and Helen Aquino a close friend for 70 years. Also left behind, is her closest, most loved and devoted companion Kaylee, a 10 year old yellow Labrador. Jackie is preceded in death by her husband Paul, sister Harriet, parents Mildred and Jesse Sturgeon For additional information go to: www.brilesheli.com Please sign guestbook at dailybreeze.com

Published in Daily Breeze on Apr. 12, 2016– See more at: http://www.legacy.com/obituaries/dailybreeze/obituary.aspx?pid=179584483#sthash.5UmEBMNx.dpuf

How to make the most of California’s Proposition 8

Green Tip of the Week