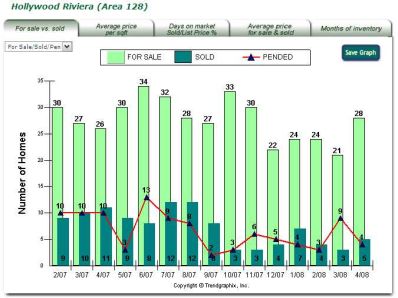 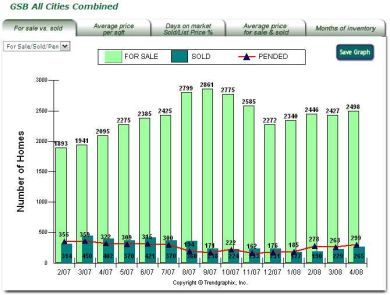 The Graph Above says a lot about what the real estate trends are here in the Greater South Bay of Los Angeles.  April 2007 showed there were a total of 2095 homes for sale with 322 homes in escrow and 402 sold.  Fast forward to April 2008 and see that the number of homes for sale is up to 2498 – a 16% increase.  The number of homes in escrow is down to 299 – a 7% decrease year over year.  The number of sold homes is where we see a larger difference – with April 08 solds coming in at 265 – a 32% drop year over year in the number of units sold.  This makes comping homes for this year difficult as there are not that many to compare to.  The April 2008 Greater South Bay average price of $878,000 is approximately an 8% drop from April 2007’s average price of $963K.

Let’s look at one neighborhood closely for comparison purposes – Hollywood Riviera vs. the Greater South Bay as a whole.

The story is fairly similar to that of the Greater South Bay as far as number of units sold year over year.  April 2007 showed 11 homes sold and April 2008 shows 5 – a 54% drop.  That’s pretty significant and makes comping homes for a value very difficult.  When someone says, “What is my house worth?” it is very difficult to say sometimes without a similar house to compare it to.  Let’s look at the current inventory vs. last years inventory – it is relatively the same.  April 2007 had 26 homes for sale and April 2008 had 28 homes for sale.  Where the big difference lies though is in the average Days on Market of those homes.   Those 26 homes last April had only 19 average days on market – and this April shows its 28 homes for sale had an average market time of 70 days….that’s a whopping 73% difference.  Wow!  That is something to think about when you are planning on how long it will take to get your money out of your house.  Add to that a longer typical escrow length – banks are taking longer to get loans underwritten.  Where it used to be very normal to close an escrow in 30 days today we are seeingn 60 days as a norm and even then it is not uncommon to see the bank not close on time.  A very frustrating experience for everyone involved.

Keep this information in mind when you are considering marketing your home.  Pricing your property properly is key if you want to reduce your time on market!

Green Tip of the Week

Churning and Burning a Listing